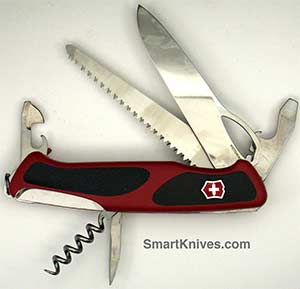 The Victorinox RangerGrip 79 is a retired, large 130mm folding Swiss Army knife with a large locking blade, wood saw and basic tools, with a one-hand opening blade. It is part of the Delemont series, which uses designs and some parts from the original Wenger Swiss Army knife.