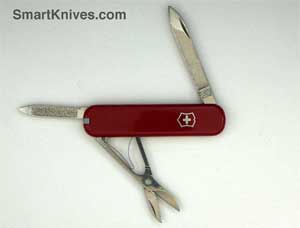 The modern Victorinox Ambassador Swiss Army knife is a basic Swiss Army knife, in a pocket-friendly 74mm / 3" format. It has the same tools as the extremely popular Classic knife, but they are all a bit larger and longer. The current model with a scissors rivet was introduced in 1992, and is still in production.