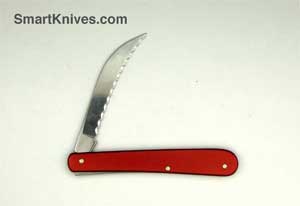 The Victorinox Baker's Knife Swiss Army knife is a retired, standard sized 91mm / 3 1/2" Swiss Army knife, with just a serrated single blade. This knife is handy for cutting bagels, bread and twine (it has also been called a Twine Cutter knife. There is also a similar version of the Baker's Knife that has a plain blade.