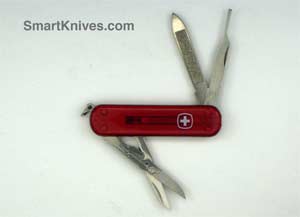 The Wenger Air Traveler is a retired, keychain-sized 65mm Swiss Army knife that has no blade, so it is safe for air travel. However, we have seen a few in airport confiscation lots. Unfortunately, if some TSA agent decides it is dangerous, you may lose it despite the lack of blade.

NOTE: This combination of tools was first sold as the Opti-Tool, but it was renamed after blades were banned from airplanes, because of 9/11. There is also a less common bladed version of the OptiTool which has a small blade instead of the nail file.