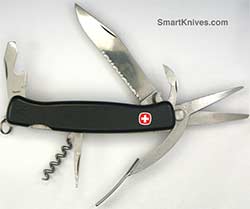 The Wenger Mountain Ranger is a retired, 125mm locking-blade Swiss Army knife with unusual end-mounted scissors, plus a basic set of tools. It was a rather rare precursor to the later Ranger series knives that had either scissors or pliers with a similar end-mounted design.

There are no similar knives from Leatherman or Victorinox.