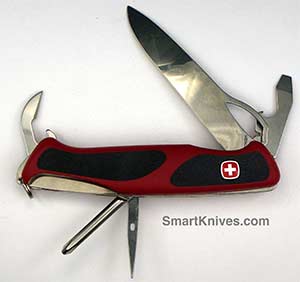 The Wenger RangerGrip 60 is a retired, large 130mm folding Swiss Army knife with a large one-hand locking blade, a corkscrew, grippy bicolor scales, and basic tools.. The RangerGrip knives were introduced in 2009 and retired in 2013. However, this model lives on as the similar Victorinox RangerGrip 60.