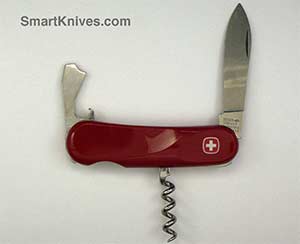 The Wenger Evo 63 is a retired, pocket-sized 85mm Swiss Army knife with contoured scales, and just a single layer of tools. It is the lightest of the 85mm Evolution (Evo) series, introduced in 2008 and retired in 2013. Unlike most of the other Evo models, Victorinox did not choose to extend the life of this on via the Delémont series.