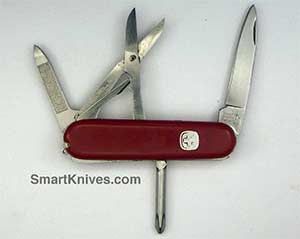 The Wenger Hobbyist is a rare, retired, pocket-sized 85mm Swiss Army knife that is the smallest model with full-size scissors and a Phillips screwdriver. It is a relatively small knife that has a tool combination found on no other Wenger or Victorinox model. Model #10403. The Hobbyist was more common in the 1970s and earlier. It has also been called a Pocket Mate or a Standard 1.04.03.