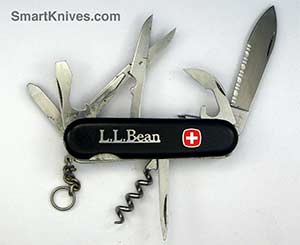 The Wenger Swiss Sportsman Serrated is a retired, pocket-sized 85mm Swiss Army knife that was sold by the LL Bean sporting goods company. It is similar to the popular Traveler model, but with a flat Phillips screwdriver instead of a nail file. This model is a special and relatively rare variation of the regular Swiss Sportsman with a serrated blade.