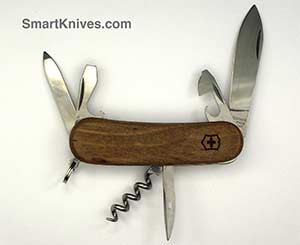 The Victorinox EvoWood 10 is a pocket-sized 85mm Swiss Army knife with basic tools, and contoured scales. It is part of the Delemont series, which uses designs and some parts from the original Wenger Swiss Army knife