The long file is an unusual tool that is only found on a few vintage Swiss Army knives. This tool is sometimes called a manicure blade.
Victorinox first included the long file on some early "gentleman" knives, expanded it to the Champion and other models during the 1970's, then added it to several of the standard Swiss Army knife models in the 1980's. Victorinox retired all of the long file models in the 1990's, and they are now rare, and very popular.
It's really too bad that Victorinox discontinued this tool, since it sometimes solves problems that no other Swiss Army knife tool can manage. In fact, sometimes it works better than anything else in a regular carpenter's toolbox! 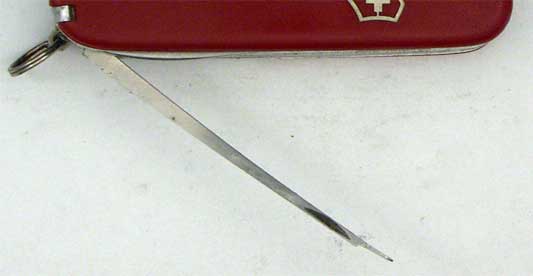 Uses: The long file fits into the back of the knife, running parallel to one of the springs. It folds out to show a long "needle file" surface, with a curved "nail cleaner" tip. It was presumably designed as a nail file, though it is hard enough that it also works well for occasional metalworking or woodworking.
Because the long file is so narrow, it can fit into tight places-- so it's great for cleaning burrs out of deep drilled holes, or filing metal parts that are too awkward to reach with a normal file.