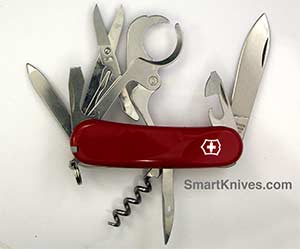 The Victorinox Cigar 79 is a pocket-sized 85mm Swiss Army knife with scissors, plus a special tool designed for cutting cigar ends. It's a rather cool implement that is also very popular among collectors, even if they don't smoke cigars! This model is part of the Delemont series, which uses designs and some parts from the original Wenger Swiss Army knife.