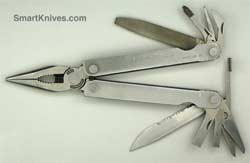 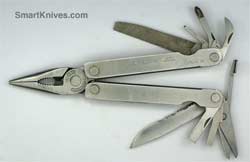 In 2001, both the PST and the Leatherman PST II tools were given a heavier set of pliers, with more metal around the pivot (just the opposite of what happened to the Super Tool in 1996). Tools produced early in the year still had the lighter pliers, the same as in 2000. The heavier pivot continued into early 2002, and until the end of production in 2003. All of the 2001 tools that we have seen have USA on the pivot.