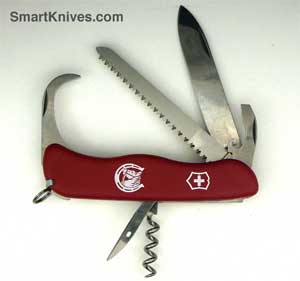 The Victorinox Equestrian Swiss Army knife is a large, 111mm / 4 1/4" Swiss Army knife with tools designed for horseback riders. It includes a hoof cleaner and wood saw. The large blade locks open, and is released with a slide button on the rear scales. This model was retired around 2013, but it still lingers.