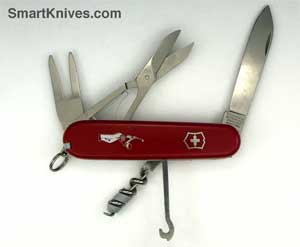 The Victorinox 91mm Golfer Swiss Army knife is a standard sized 91mm / 3 1/2" Swiss Army knife, with a divot tool. It was designed for golfers, preceding the current Golftool.

The Golfer started out as an 84mm knife in the 1970s, with a more basic set of tools: just scissors, opener and blade. The model had several variations, and its tools evolved gradually through the 1980s. In the early 90s, Victorinox enlarged the Golfer, and called it the Compact. They also added this golf-specific version with the original name.