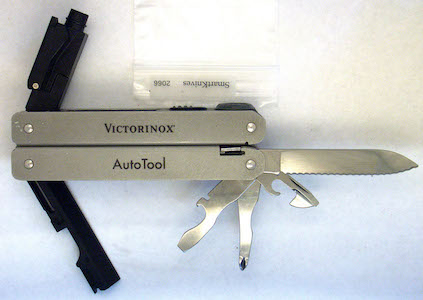 The Victorinox AutoTool is a retired, specialty tool from Victorinox that was designed to fit in a glove compartment, and provide a good set of automotive emergency tools. It's a fatter variation of the SwissTool that has a few items found on no other Victorinox products. It has large pliers with a wire cutter, typical SwissTool implements inside one handle, plus a flashlight and automotive tools inside the other. This model was retired by Victorinox in the 1990s after a relatively short production run.