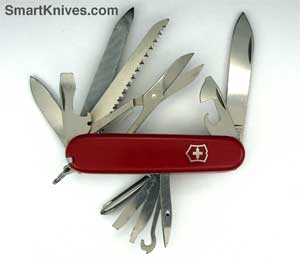 The Victorinox Master Craftsman Swiss Army knife is a retired, standard sized 91mm / 3 1/2" Swiss Army knife, with a generous assortment of basic tools. It is similar to the Ranger, but with a Phillips screwdriver on the rear instead of a corkscrew. This model was produced from the 1970s into the late 1990s or early 2000s. There are slight tool variations, depending on the era.