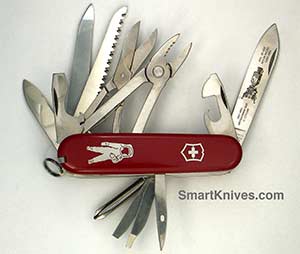 The Victorinox Astronaut Swiss Army knife is a standard sized 91mm / 3 1/2" Swiss Army knife that was a special release in 1989, to mark the 20th anniversary of the Apollo 11 moon landing. It is a Craftsman knife, but with an astronaut in metal inlay on the front, a laser-etched blade, and a serial number behind the corkscrew. The Astronaut knife comes with 1989 tools: including an adjustable scissors screw, pliers without a crimper, and no parcel hook on the rear. This model is very rare and collectible.